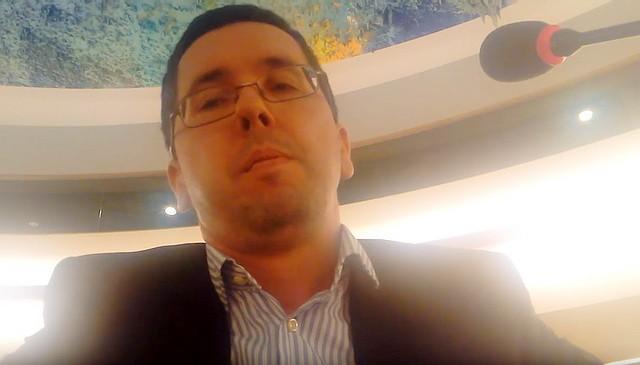 My name is Michael Chernov, I am an expert with Historical Memory Foundation and also head of the Foundation for Support of Jewish Culture based in Moscow, Russia.

First of all I would like to thank the UNHRC and the Forum for the possibility to speak here on these very important issues for the Jewish minority in Russia.

What is the basic thing, the core of the Jewish identity? It is the religion and the religious education. It doesn’t matter if you are a believer or an atheist: the only thing which lets the communities to exist for centuries and not to disperse is Judaism. So strong and stable, prosperous community needs Jewish education including studying of Hebrew for the ability to read the Holy Scripture. That is our basic Human Right – to keep our identity and identity of our children.

And what is the situation in Russia with the Jewish minority and Jewish education to guarantee the community’s existence and development? Formally, it’s OK. Jews in Russia have freedom. You can teach and study whatever you need. But in reality we do not have a high level and officially recognized by Jewish bodies and by Government bodies system of the Jewish education.

So what we really do need. We need help and support of the Russian Government and International Jewish bodies and educational institutions to establish Jewish higher education in Russia. We should jointly work out educational specialty standards of Theology, Pedagogy and Jewish Education, Work with National Communities etc. and then to establish a special faculty at one of the prominent universities thus taking the first step to the full scale independent Jewish educational system in Russia (including in Jewish languages). Let us to preserve and develop the unique Jewish community of Russia for the sake of humanity and tolerance.

Thank you for your attention!